This year I had the opportunity to participate in one of the least well known, but incredibly popular maker events to go on all year in the Chicago Area – SCAV HUNT (aka. UChicago Scavenger Hunt). 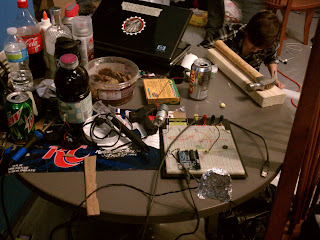 Scav Hunt is really only supposed to be open to students of the University of Chicago. However, there are no rules against polling some outside help (me!). My friends who go there and went there asked me to come in and help them with designing much of their more complicated items. The list of all potential things/agony is HERE:
http://scavhunt.uchicago.edu/list2011.pdf 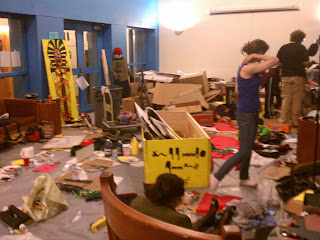 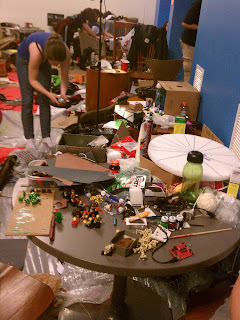 Originally I was only coming in to design the system that they needed for their “LEGO: Order of importance in the Geek World Zoetrope.” They had the basic design down, but they could not figure out how to make and control a light source and motor to sync up perfectly. Mind you, these people have 4 days from start to finish for that entire list of items. That and UChicago has a well known saying, “That is all well and fine in Practice, but how does it work in Theory?”. Needless to say, circuit design and microcontrollers are a bit out of their area…..No worries! That is why you have engineer friends, people who deal with the 3rd Dimension almost exclusively.

This is a pretty jerry-rigged device using an Arduino (remember that I have to explain how this stuff works for a new person and how to fix it if something goes wrong), some solid core wire, rotary wheel potentiometer, and Dollar Store solar powered lights. 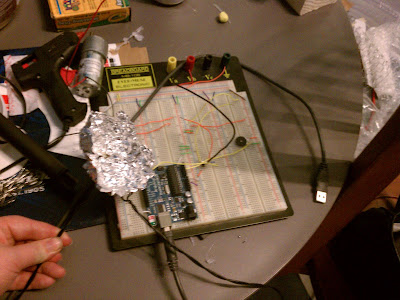 I figured that having them worry about adjusting power and such was a bit awkward, so a logarithmic potentiometer was chosen as it would allow the user to “dial-in” to the very low speed that they wanted to use for the Motor as well as adjust on the fly for perfect performance. Best to think of it as a trim-pot 😉 Since I didn’t want to loose any of these electronics and only had a bit of time to help them out, it was all done on protoboard aside from the LED driver boards (things with foil around them).

The motors that I had are small R/C 5v motors which were not large enough for their 6 tier Zoetrope but we did have a 24V motor on hand. Considering we still needed to drive this thing. I just rigged up a simple circuit like you would for a digitally controlled relay and seemed to work just fine for the speed wanted here. Vcc is connected to the 24V with + and – connectors for simple motor operation. it did not go fast, but it did move! Pinouts should be easy to tell from the code and you can always add more LEDs!

for Arduino!
Connects a white LED to flash every tenth of a second.
PWM punction for the Motor drives it to 10 revolutions per second.
A 10k logorithmic potentiometer does regulation for the
speed control of the motor which is read read by the A/D pin.

This example code is in the public domain.
*/

I also helped design a Robotic Juggler and used a TI Launchpad for that. The new GRACE Graphical Programming was extremely easy for them to use and understand for adding the blinking lights. The Robotic Juggler used Two Leaf Blowers ($30 at Ace Hardware) to blow Whiffle Balls into the Air and “juggle them” with Funnels of chicken wire to catch the falling balls and Flexible PVC pipe to launch them put again. Whole thing controlled by a $4.30 board!

For those not familiar with me personally, I LOVE to cook! The team was having trouble with a Veloute and could not understand why it did not come out all that great even though they followed the instructions. FRENCH FOOD HAS NO INSTRUCTIONS!!!!!! They had made a Veloute sauce and it was globby, thick, too salty, grainy, and tasted of flour. I fixed it and I will give you some pointers in another post soon as to how to make lovely creme based sauces and the tricks used by the pros. Almost anything that has not been burnt can be fixed.