I just finished restoring a Webcor All Tube amplifier back to working condition. 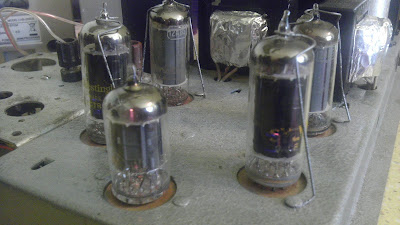 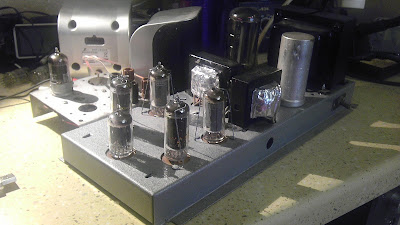 Webcor was known for their fairly complicated Tube amps with interesting topologies. This is a stereo version of the Webcor 4905.

This is a Stereo Push-Pull Amp. It uses a 5Y4 rectifier tube, 12AU7/12AX7/noval signal splitters, and 2x 12AB5 per channel that do the Push/Pull. The total output is about 8.2W/Channel. Remember that these are “old watts” so it really performs like amps with 3-4x’s the rated RMS wattage. It was full of nice Allen Bradly resistors that haven’t drifted almost 45 years later!

I have already started the modifications after getting it back in working order. There is a headphone output, potentiometer, and better power cable being added as we speak. From there, I have some really nice capacitors that will be put in the 4 spots in the signal path to each of the 12AB5’s and hidden Nippon Chemicon Negative Black caps for the power section to replace the old electrolytic 3-in-one.

Here is some info on the 12AB5 courtesy of Pete Millett’s website: http://www.pmillett.com/tubebooks/tubedata/hb-3/receiving_tubes_part_2/12AB5.PDF

Let me know if you would like to see anything else done to it (other than a re-case – which will happen!).

I am restoring a Webcor 4905-1A. It uses a 12AT6 triode and single 12AB5 for the power amp. You can read all about my trials and tribulations here.

Can you send me the diagram of this amp and any other information about it? i have the power part webcor 14×325-1 (broken) and i don’t have any info.
thanks.
Geandris.

This Thanksgiving I thought it would be good for the kids to be able to learn something in the void of time at Grandma’s house on Thanksgiving and Make something! The Drawdio is something that Read more…

Street Beats is on the Market! QR Code:  AppBrain: http://www.appbrain.com/app/street-beats/us.one_dollar.StreetBeats Now you can choose your Lyric Search Engine. We are working on getting the Humming service up and going in the official version, but there is Read more…